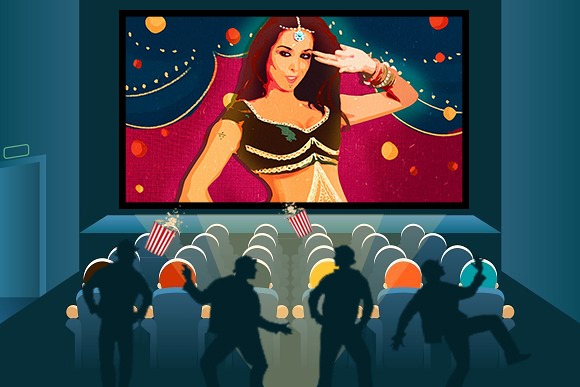 Indian Childhood: The steady diet of sexism and objectification
through entertainment and music.

The majority of premium international schools and government schools may be miles apart in terms of resources and perception of quality, but they share one thing in common – the subconscious objectification and sexism being built up in the mindset of the students.

One may go and visit any school, there are students happily singing along to songs which seem to be promoting a sexist attitude while objectifying females. Case in point: Let’s consider the english translation of a famous song by a famous artist that children seem to love:

“Take you ID, passport
Credit card, pass-code
Zipper, your slipper
On your fridge, the sticker
Your glossy lipper
Some liquor for me​,
Don’t worry,
Just do it, everything quicker
Now latch your father’s room,
And pack for me-
Some bread and okra​.”

Were you able to able to guess the original song or the singer?
Well, here it is:

People may have opinions on the nature of the lyrics. Some people find them very creative, while people, such as this author, find them terrible. However, what is unmissable is the inherent sexism in the words which is easily missed. The male is telling the female to pack some “liquor” for him. ​Also, he somehow cannot seem to pack his own food. As ‘hip’ as the song seems to be, it still falls back on the age old Indian visual of the female not drinking alcohol (Disclaimer: Alcohol consumption is bad irrespective of your gender) and packing everything for her heroic boyfriend, who also wants to make sure his girlfriend has gloss on the lips irrespective of her choice.

And then we have these popular monstrosities:
From the recent times (hint: Item song based on a brand of glue):

“People tell me that I am salty butter
I will cut the heart, my youth is a cutter
The one who sees my talent, gets fainted
Keep the shutter of your eyes closed”

We are sure you must be humming the original song, which is something like this:

From the early 2000s, this ‘enthusiastic’ piece from the movie ‘Josh’:

I told her she was my Laila. She said, “The bastard’s lying.”
Whenever I tell the truth, why does she always think I’m lying?!
This must just be her style;​ ​”No” on the lips, but “yes” in her heart!

You would definitely relate to singing the original version of the song above, which is:

We could look at the 60s, 70s, 80s, or 90s whatever is the time, our songs have been filled with objectification of the female gender, harassment, and sexism. Whatever generation we are from, in schools we have grown up singing such songs. In fact, some of our ‘model’ teachers prepare students to perform such ‘music.’ The popular opinion is that such songs are harmless fun. The common excuse given is that the song is listened to for the ‘beats’ while conveniently ignoring the fact that a child is verbally articulating and subconsciously processing such lyrics.

It is not being suggested that Indian songs are only the problem. Songs by english artists also
tend to do the same thing.

Some English songs that immediately pop up in our mind are:

Baby I’m preying on you tonight
Hunt you down, eat you alive
Just like animals​, animals, like animals

The heart of the problem is not the songs, it is ourselves. We do not educate the students on the lyrics. We forget to analyse potential sexism. We fail to discuss the possible objectification. As the popular refrain goes, we listen for the ‘beats.’