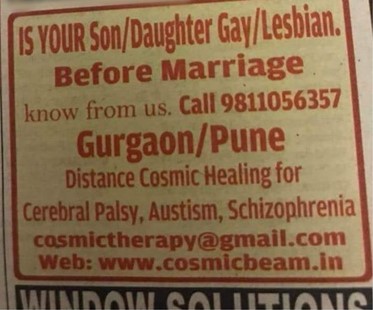 Do you see this advertisement? How do you feel? Feeling weird? Well, I did too. However when I dug deeper, I found out this is not that unusual in India. Parents resort to “Corrective rapes” “Conversion Therapy” 1 to “Straighten” their gay kids. Even honor killing at times. In the movie “UNFREEDOM” directed by Raj Amit Kumar, a similar sequence is shown where a girl is raped by her father’s colleagues to mend her deviant ways.

On interviewing a group of middle aged couples residing in north Delhi, I got many responses which were strictly against homosexuality. Meena, a homemaker puts her views as forth as “This is not right. We have taken birth in this world to give offspring. It’s a blessing for us. Human life is complete only when we give birth to another life. If we indulge in these kind of activities we are dishonoring god.” Her husband adds on “We see many such couples inside the north campus of Delhi University. Do they represent us? Have you heard of any men of my age liking someone other than women? All this is because of TV and Internet. The west is influencing young minds a lot. They are just misguided kids who have blindly copied western culture. This is not love, this is just an acting to look different.”

Everybody in the society has a role set. Not performing according to that role set, especially the gender roles always bothers the society. Homosexual relationships are condemned by the people. It’s seen as unnatural and often a “phase which will be over soon.“Sujata (Name changed on request) is a lesbian working with a private firm in Delhi. She tells her story, “My parents disowned me because they think I am not normal. For them a normal life is earning, getting married to “a man” instead of living in with a girl. They often call me and say that they will accept me back only if lead a “normal life.”

Love sees no caste, no class, no gender, then why are we imposing restrictions on who to love and who not to. Who are we to call a person’s love towards a anyone unnatural? What is normal and what is abnormal is all a social creation. We are so habitual of seeing the society function in a particular way that it’s hard for us to digest anything going in a different direction. What we do, what we are expected to do as males and females are just social norms which we are expected to follow to be accepted as a
member of community. It is the very reason that people from LGBTQ community are ostracised because
they fall into the created category of “normal”. Pratik who is working closely with LGBTQ community states that “The stigma attached to homosexuality has been ingrained in us for centuries. It roots from values that roots from factors like heteronormativity (meaning that only opposite-sex attraction is natural), religious values and toxic masculinity. There are many layers to this stigma which come with misconceptions that we learn from stereotypical portrayal of homosexuality in pop culture. Lack of awareness and deficiency of resources to learn about homosexuality along with absence of dialogue between families are factors that help this unacceptance grow.”

The society’s stigma towards homosexuality is validated by Section 377 which criminalizes gay sex. Supreme Court in 2013 overruled Delhi High court’s verdict of 2009. The Division Bench of the High Court considered that-
“The sphere of privacy allows persons to develop human relations without interference from the outside community or from the State. The exercise of autonomy enables an individual to attain fulfilment, grow in self-esteem, build relationships of his or her choice and fulfil all legitimate goals that he or she may
set.”

However Suresh Kaushal vs Naz Foundation judgement of 2013 was a little shocking for the whole LGBTQ (Lesbian Gay Bisexual Transgender Queer) community of India. It was held that –
“Those who indulge in carnal intercourse in the ordinary course and those who indulge in carnal intercourse against the order of nature constitute different classes and the people falling in the later category cannot claim that Section 377 2 suffers from the vice of arbitrariness and irrational classification…..While reading down Section 377 IPC, the Division Bench of the High Court overlooked that a miniscule fraction of the country’s population constitute lesbians, gays, bisexuals or transgenders and in last more than 150 years less than 200 persons have been prosecuted (as per the reported orders) for committing offence under Section 377 IPC and this cannot be made sound basis for declaring that section ultra vires the provisions of Articles 14, 15 and 21 of the Constitution.”

Thus finally it was held-

“….Section 377 IPC does not suffer from the vice of unconstitutionality and the declaration made by the Division Bench of the High court is legally unsustainable.”

However, a new hope has kindled in the community with Supreme Court’s decision to take fresh pleas against Section 377. They are optimistic that Supreme Court’s verdict will give everyone the freedom to love anyone irrespective of their gender. This will do away with the harassment they face in public spaces and live their life the way they want. It will also help many more to come out of closet without the threat of law or fear of acceptance. A positive verdict will definitely decrease the social exclusion they have to go through.