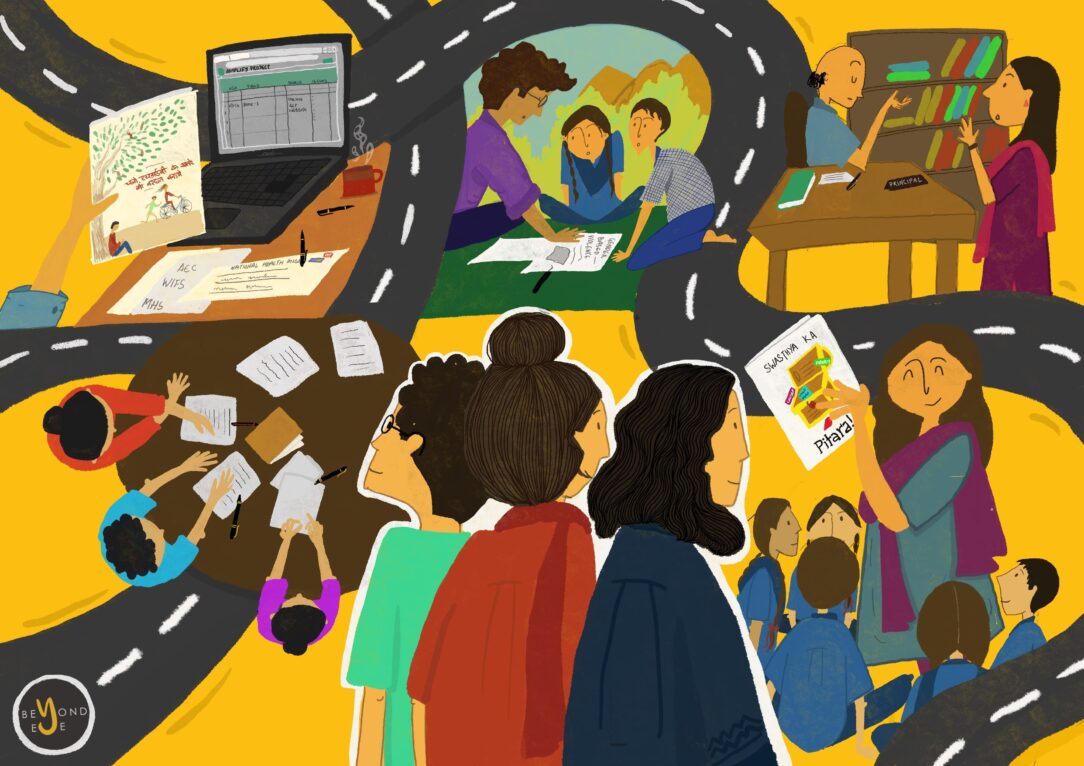 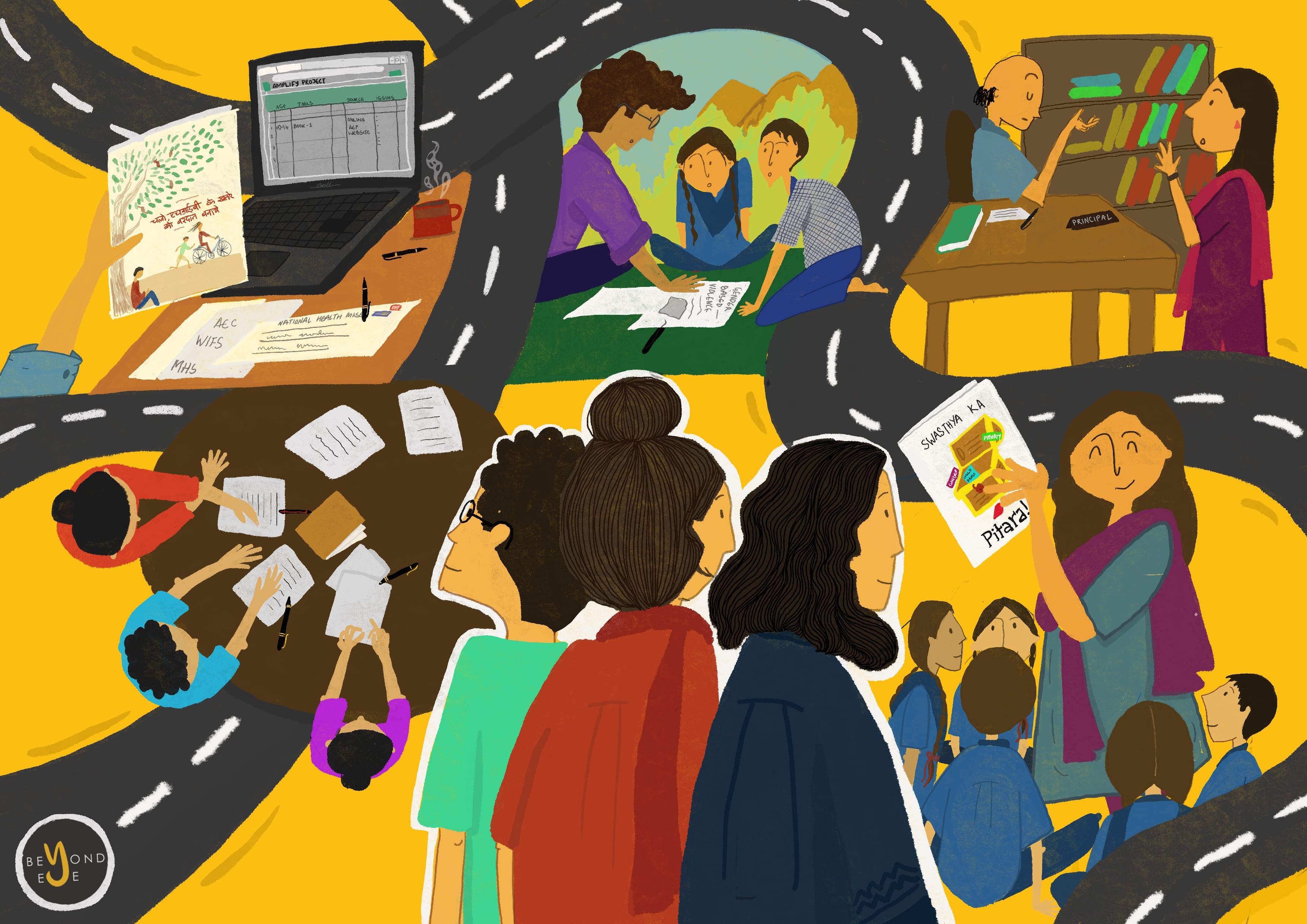 “Children do learn what they live. Then they grow up to live what they’ve learned”

Growing up is difficult. We all have grown without adequate information about the challenges and changes during puberty. Many times challenges of adolescence related to body and sexuality are ignored. This ignorance can lead to adulthood that is adversely impacted. To prevent such scenarios it is important to make early childhood interventions through models like Comprehensive Sexuality Education (CSE). In this model, adolescents are informed about issues like attraction, body, growing up, gender, sexuality, violence, and many more. When adolescents are informed about these issues, they learn to make choices that are informed and well aware of possible consequences.

With keeping the above ideas in mind, Beyond Eye implemented their project on co-creating CSE visual tools in Rajasthan and Uttarakhand. A team from Beyond Eye visited four government schools to conduct a need assessment and study the context around sexual and reproductive health (SRH). By conducting a survey, Beyond Eye narrowed down four issues, namely child sexual abuse, gender norms, growing up, and menstruation, as main the themes of the entire project. The issues chosen through this study were based on the following factors:

Firstly, the study showed that adolescents in both locations were never provided with CSE, which lead to :

In Uttarakhand, the discussions on Child Sexual Abuse (CSA) showed that information given to adolescents was inadequate. They were not aware of proper mechanisms to deal with the issues of CSA. In Rajasthan, they knew that someone should not touch them, especially on their reproductive organs, but they were not sure what can be done if such an incident occurs with them.

In both locations, the issue of CSA is often taken up by the local law enforcement authorities as an awareness programme, but they generally do not help adolescents as they are unable to build friendly, safe and open spaces for them. Lack of such spaces makes an adolescent hesitant in reporting the abuse. Also, these programmes do not discuss the aspect of abuse within the family. The statistics show that child sexual abuse can also take place inside the home. The National Crimes Records Bureau (2017) showed 16427 registered cases under POCSO Act -2012 by people known to the child (Page 350, NCRB-2017).

An adolescent when goes through pubertal changes does not know whom to approach for explanations. Due to shame and stigma related to these issues, adolescents often turn towards their peer groups. Since their peer groups also lack adequate information, they pass on inaccurate information leading to the prevalence of myths around the issues of the body.

In both the locations, adolescents expressed shame and stigma in discussing issues related to their body and sexuality. In the discussion of puberty, adolescents mentioned knowing the parts of our body that are called Guptangs (secret parts of the body which includes anus, penis, and vagina). Though, they did not know what is so gupt (secret) about these parts. They just knew that these parts are gupt (secrets) because they are told so about them. Since they have been told this for ages, they have believed that the reproductive and sexual organs like penis, vagina, and anus are guptaang (private parts) and it is shameful to discuss them.

In Rajasthan, adolescents mentioned that they are not given any education on puberty and body anatomy by their parents or teachers. In both locations, the discussion was often marred with a sense of shame in talking about one’s own body, especially when it came to talking about sexual and reproductive organs.

On the question of mensuration, many adolescents did not understand Hindi words like “Mahina aana, period hona” (Occurring monthly, periods) but they understood it through words like “Chuachhoot” (untouchability). The shame and stigma around menstruation were visible when such discussions had complete silence.

Both locations have been practising social and cultural gender norms. For example, adolescents expressed belief in many of the gender roles that they see around them. In the study, 79% of adolescents agreed that boys should be good at sports. Around 44.9% of adolescents said that women should cover their heads. During focused group discussion, many boys expressed that though they occasionally contribute into the house, a clear division between the kind of work a boy or a girl will do are clearly defined.

While discussing gender-based violence, 20.7% of adolescents think that it is okay for a husband to hit his wife if she does not cook well, but 43.3% adolescents supported the violence if she disrespects her in-laws. Here, the question is not on what an adolescent thinks in these complex situations, rather it is on the ideas that they grow up with. In such an environment, data shows adolescents grow up learning and accepting violence against women.

In Rajasthan, the girls mentioned that during menstruation, girls are not allowed to touch water pots and pickles. They cannot even enter certain spaces like the kitchen and temple. They are also expected to wear different clothes and sleep separately. In traditional communities, such restrictions are common and strictly followed. In the hill communities, menstruating women are expected to sleep in a specified room and are given food in separate utensils. Boys are not involved in the discussions around menstruation as except for a few the majority of the boys had no idea about it. It is crucial to involve boys in such discussions as it helps in normalizing the process of menstruation.

The fuzzy boundaries of gender in the community are actively ingrained on the minds of the adolescents. It is evident when adolescents are often told to behave according to their gender. This shows that the suppression of sexuality begins at a younger age. The sexuality of girls is often confined into the silo of purity and the ideals of being a good girl. They are expected to be perfect housewives and caregivers in the family, which lead to a lack of higher education and the occurrence of early marriages.

Secondly, in both the locations, we are the first organization to discuss such sensitive issues with the age group of 10-14 years. It is to be noted that the communities in rural areas have grown up with ideas that might give an impression of regression. It is vital to understand that these cannot change by limited interactions. Therefore, it is imperative to develop trust among the community before introducing different ideas which are believed as norms by them. This opens the space to create dialogues around issues like child marriage, sexuality, gender identity, and many others. We need to be cautious so that we do not overstep as it risks any further larger discussions. Additionally, it was also done because the schools which agreed to work with us share an intricate relationship with the community. Therefore, it is necessary to keep all the above- mentioned approaches in mind to avoid any backlash from the communities.

Thirdly, the Government of India promotes Rashtriya Kishor Swasthya Karyakram (National Adolescent Health Programme, RKSK) as a flagship programme to provide SRH in schools. RKSK covers issues like growing up, anaemia, menstruation, teenage pregnancy, body image, mental health, child sexual abuse, etc. This enabled us to introduce sensitive issues mentioned above because schools are less likely to object to any programmes which are based on government policies.

Finally, it was identified that the RKSK programme has not been implemented adequately as all the schools were only providing some information on issues like anaemia, child sexual abuse, and menstruation. The lower levels of information among adolescents explained that the existing model of SRH is not showing any changes in them. Hence, it became crucial for Beyond Eye to introduce adequate methods to facilitate conversations on CSE in collaboration with not only schools but also adolescents.

Adolescents without any proper information on their body and growing up often end up contributing to the circulation of incorrect information. This also adversely impacts their social and personal life. Therefore, it is important to de-stigmatize issues around body and sexuality. As Beyond Eye was working for the first time with all the schools, it was necessary, to begin with, immediate issues, and then slowly incorporate enough momentum to discuss SRH. It is also important to note that the organizations working on SRH cannot be a replacement of schools. They can accelerate the process of providing such education, but at the end of the day, it has to be continued by the schools.

Therefore, through such a complex and thorough process, we managed to identify l fundamental and age-appropriate issues to co-develop CSE visual tools with adolescents.